A peculiar Utopia of colored buildings, marble colonnades, towers , cylinders, cones, arches, parallelepipeds , dreamy and geometric patterns that lose themselves in the sky.
Architecture and silence are masters here, a projection of a dimension suspended between geometry and imagination, recognized as a city of Art and Metaphysics. 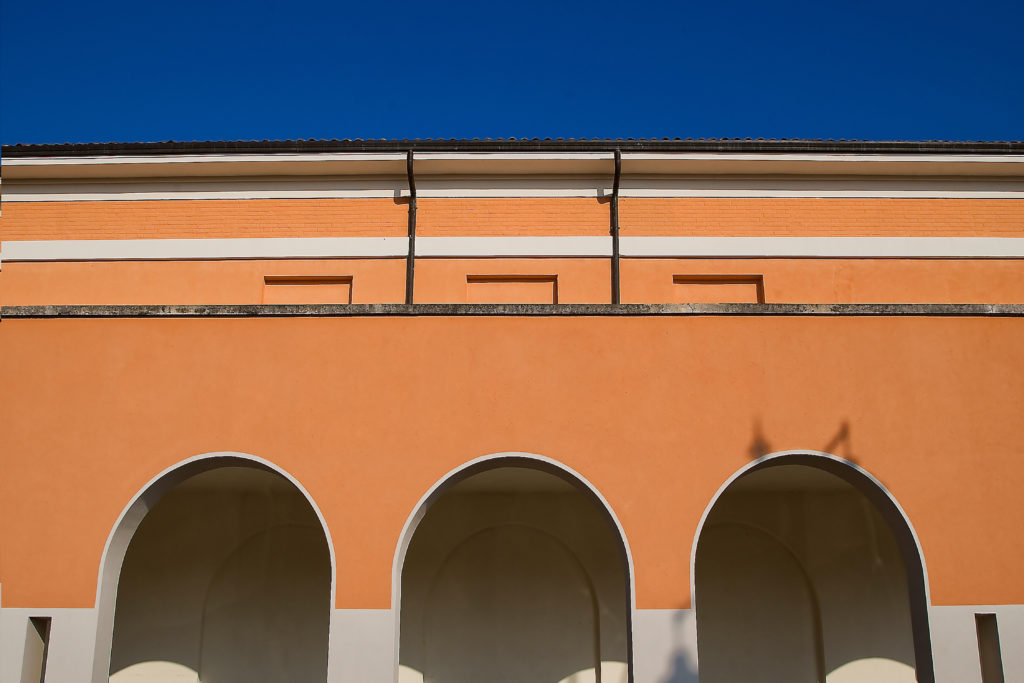 It was founded in 2019 from the fusion of the districts of Formignana and Tresigallo.

FORMIGNANA
The origin of the name is still unsure but the most probable interpretation of the name Formignana could be from Firmiano to whom Pope Adrian II gave the land to as found in a document of 870 A.D. Another possible root of the place name could be the word “form” that means “a fertile grassy land rich in forage”. Throughout its history Formignana has always been a small center for transport on the River Po and agriculture.

TRESIGALLO
In the foggy lower Ferrara territories, in a hostile land with vast unhealthy areas where water dominated the land and where you could count maybe less than a hundred souls in the small Medieval hamlet, it is here that what today is considered the capital of Italian Rationalism in the region of Emilia Romagna can be found.
The town is in the Province of Ferrara on the Eastern Pianura Padana , 20 km away from the Estense city (Ferrara) and 40 km from the Adriatic Sea.
In 1928 the small hamlet counted maybe 950 inhabitants and the majority of the population was made up of farming day laborers that lived in poor houses separated by ample courtyards. There was a plan to build a road that would connect Tresigallo and Ferrara to open to trade an area that had been living in poverty and isolation for years. The village was connected to the city of Ferrara via a 6 seater horse driven stage coach that carried travelers along a dirt track that ran along the banks of the Volano.
Between 1900 and 1914, in addition to the stage coach, it was not rare to find travelers going all the way to the Valpagliaro dip, 2 km away, in order to use the steamboat named “Graziella” to navigate all the way to the San Giorgio hamlet in Ferrara, not too far from the horse and oxen market.
In the years between 1933 and 1939 Tresigallo was at its maximum splendor especially because Edmondo Rossoni(1884-1965), native of the area, was elected Minister of Agriculture and gave way to a second Founding of the village, transforming into an architectural haven of Rationalism where buildings followed symmetry and simplicity.
The idea Rossoni had was to build an innovative “Model Town” that revolved around the need of the population and the ideas of integrated trade unionism. 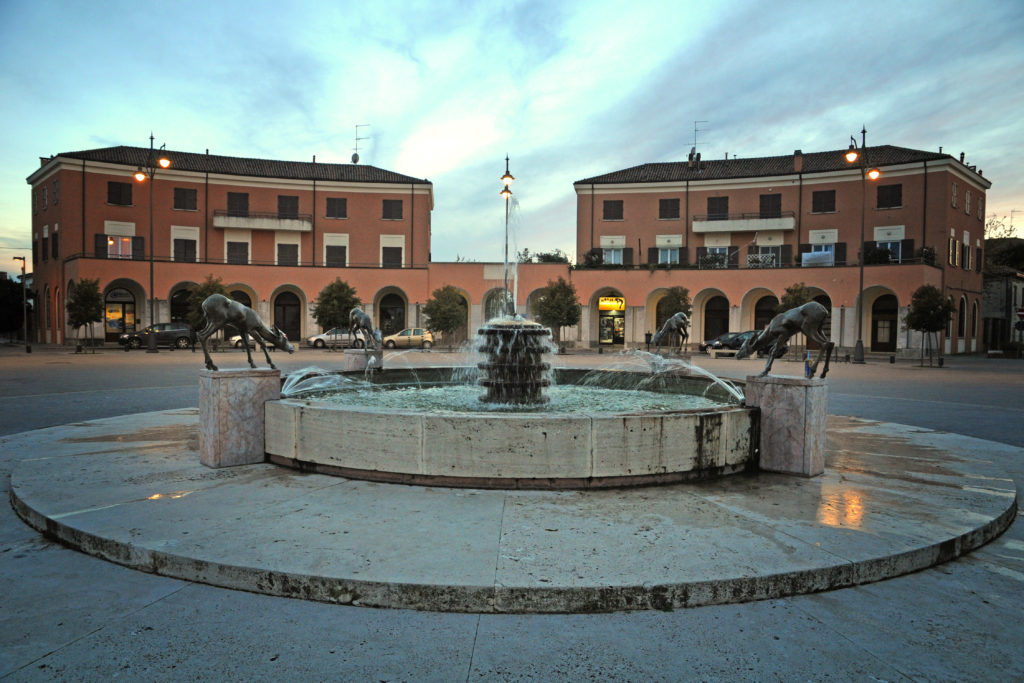 It is the main square ,right on the main axis of the of the town, connecting in a symbolic way the workplace (the industrial estate) to the place of remembrance (the cemetery). Seen from above the square has an orchestra shape that reminds people of a horseshoe configuration but it can be also interpreted as the letter D for “Dux”.
The only building with a communal purpose is the Theatre, set between the square and Viale Roma and accessible from more than one side. At the centre of the square there is a fountain with bronze sculptures of gazelles.
The sides of the square itself are framed by a wall of colonnaded buildings built keeping in mind the general public going against the regime and political driven pure utilitarian perception. Following the ideas of the founder Edmondo Rossoni the high colonnades are meant for cooperation between public and private, to aid consumption of goods and for tertiary services. 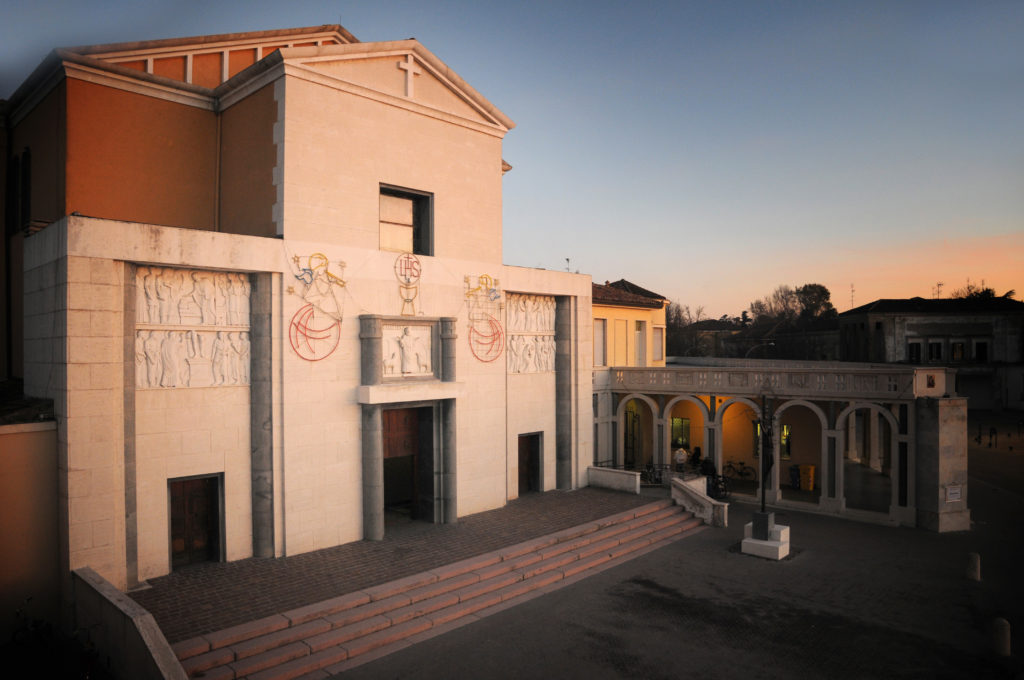 The Church of Saint Apollinare 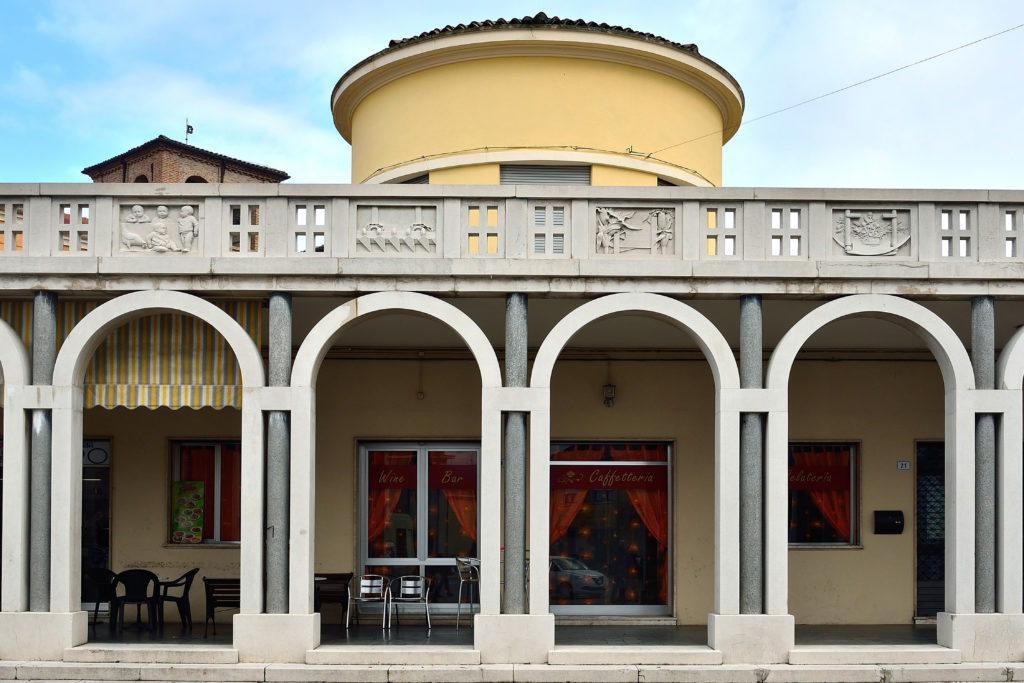 Colonnade of the Church

The Church of Saint Apollinare is of Romanic origin and has existed since 1100. It was later renovated during the Baroque period and completely redone in 1930 following a modern style of architecture. The bell tower has gone through various transformations through time.
The original façade from the 1700s has been hid under roman travertine marble covered in bass reliefs and monumental decorations.
The church has a curvilinear colonnade that encloses the town square emphasizing the perspective of Via Verdi before it.
The superior part of the church is embellished by a long sequence of marble tiles depicting the symbols of the ideology that founded the town. In the colonnade there is a Marble Cross. The buildings are positioned in such a way to add a scenographic effect to the square also thanks to the corner buildings that underline the perspective of where the axis meets. 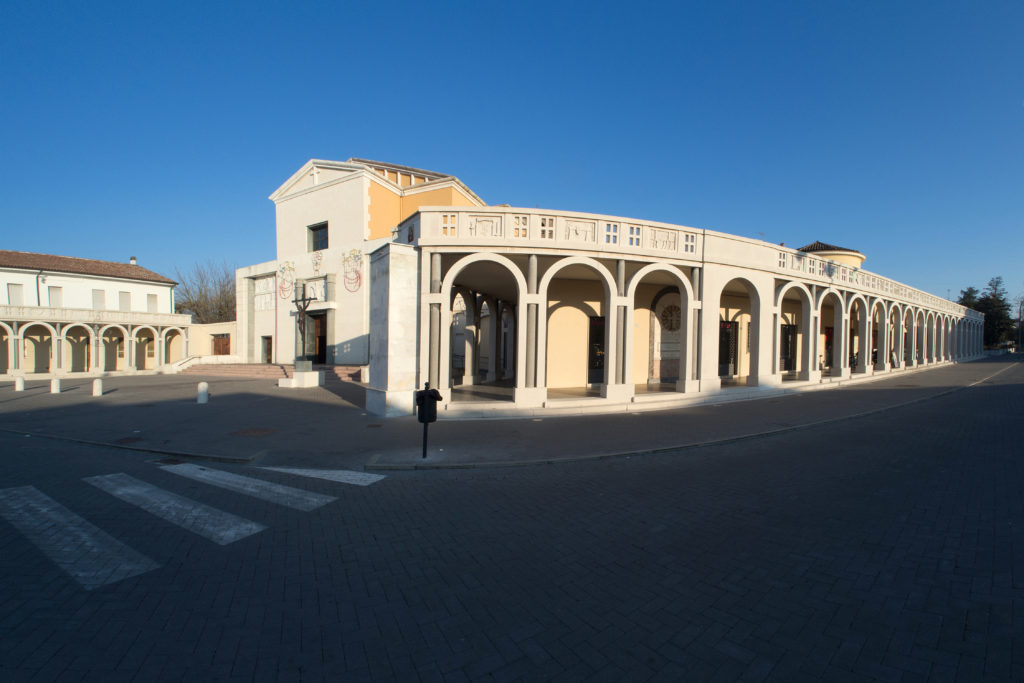 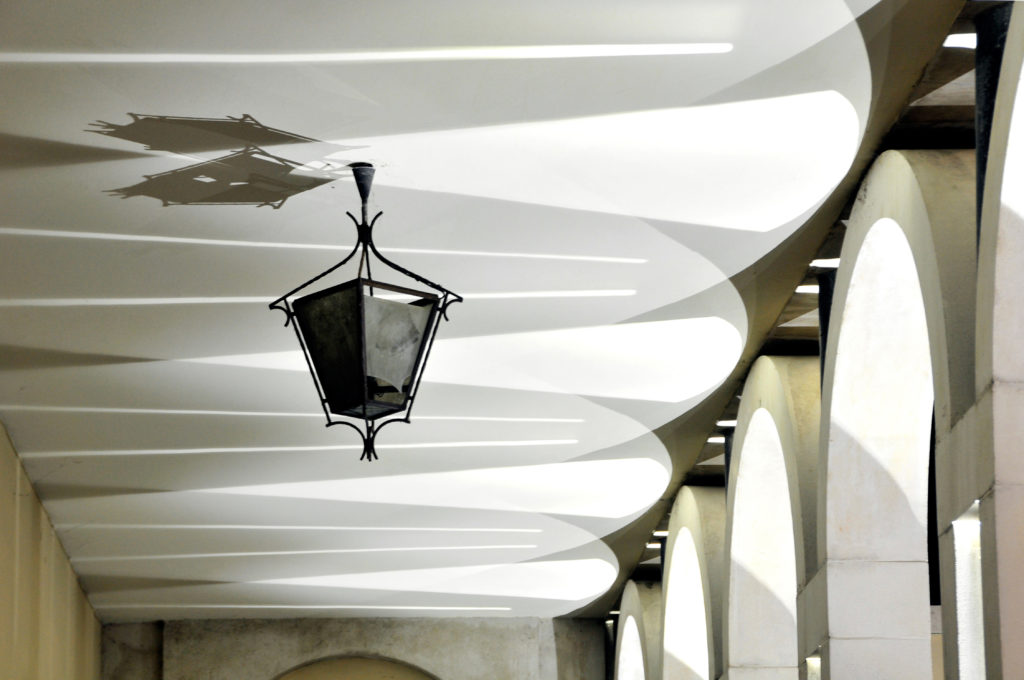 The building was at first used as a changing room and bath house for the youths part of the regime organizations that met in the nearby “Casa della G.I.L”( the headquarters of the fascist youth) .After a few years it was abandoned and became a refuge for the evacuees during the war.
After various reworking on the original layout, in 2010 the building was brought back to its original splendor and with a new name : “Sogni” ( “Dreams”). It now hosts important art exhibitions. 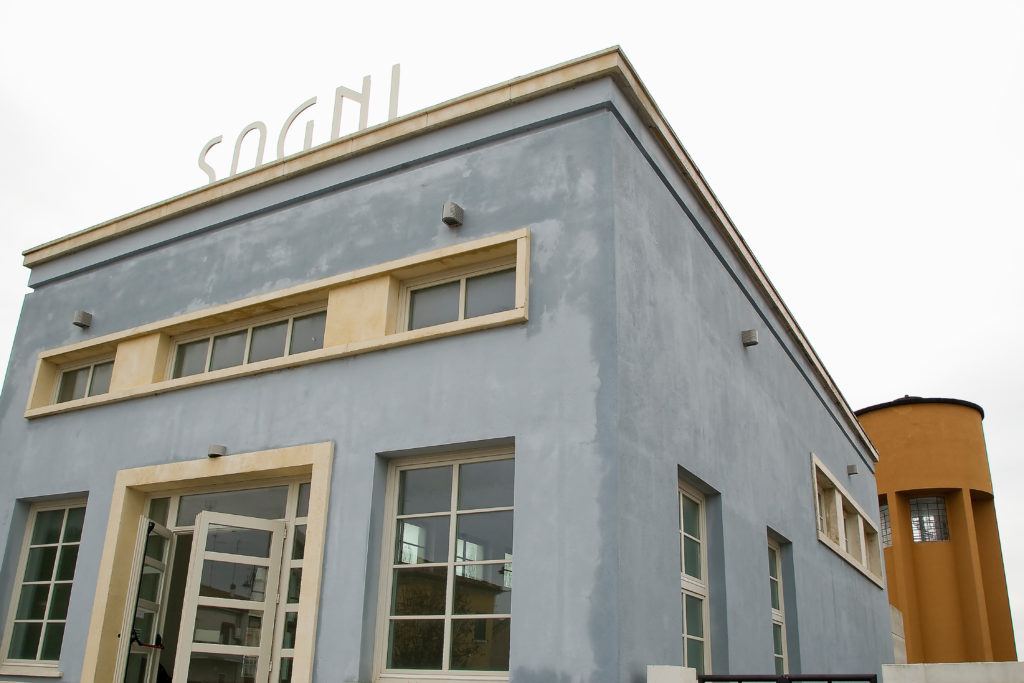 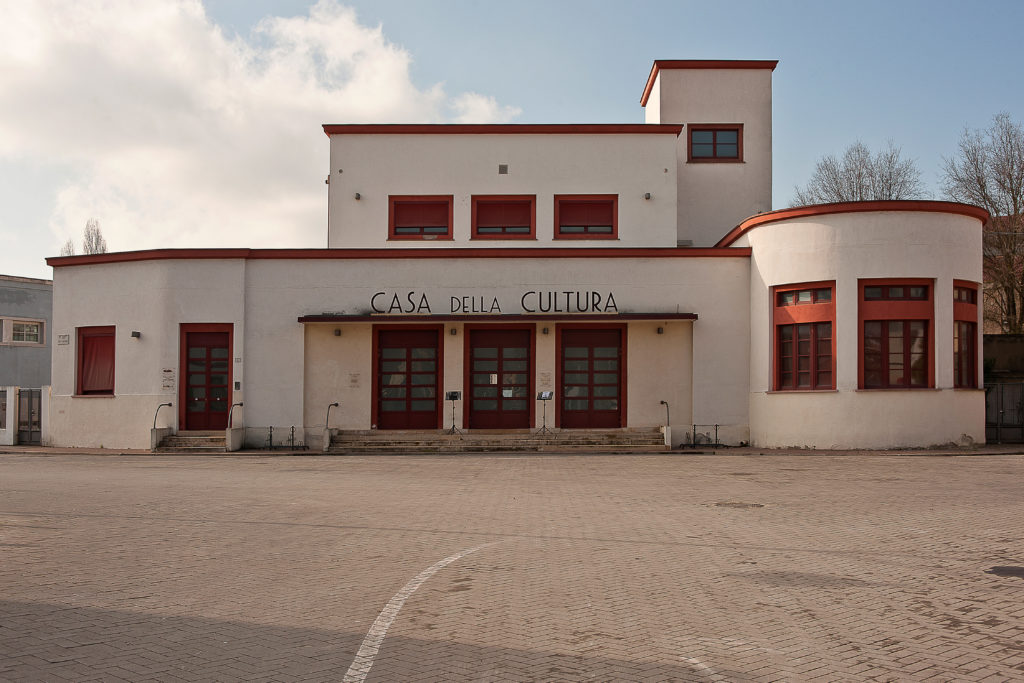 The building was initially called “ Casa del Balilla” and later “Casa della G.I.L.”.It was a built between 1933 and 1938 and was a place of both physical and ideological formation for youths.
Inside there was a Gymnasium, an office for pre-military education and a driving school. The high trussed ceiling gave the interior a sense of austerity and dominance. It was a place where both the spirit and body of young fascists acquired a sort of cult status.
The building was renovated in 2006 and is now the location of the District Library. It has been renamed “Casa della Cultura” (Home of culture). 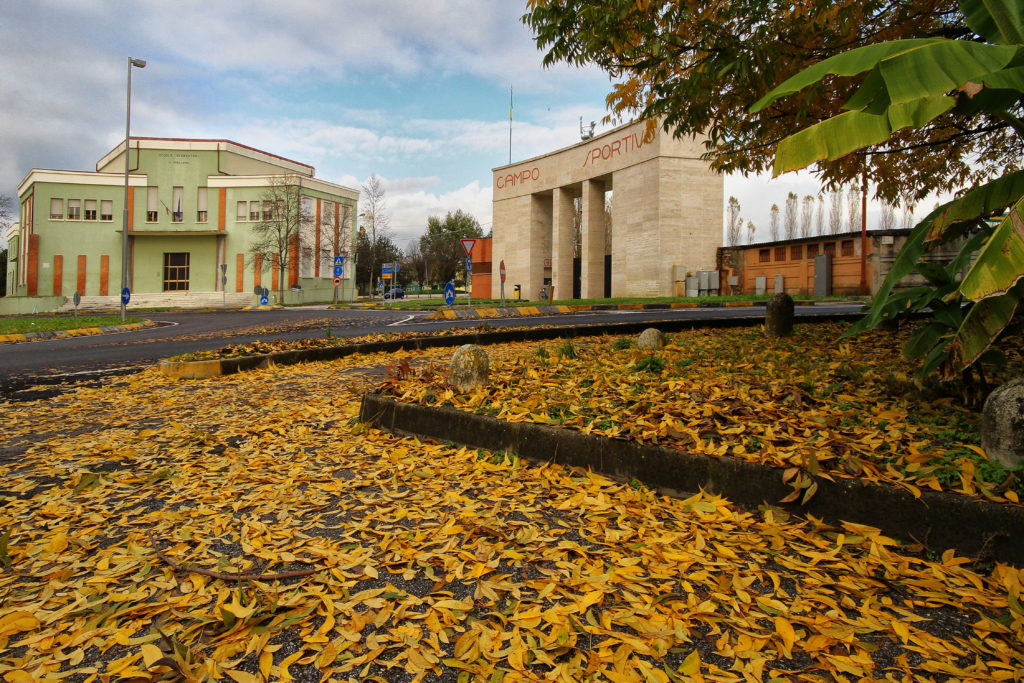 The sports ground has a monumental entrance ,following the Rational architectural style of the town, that feels like a theatrical curtain for the town itself. Initially there used to be a secondary entrance connecting the nearby school but it has been since demolished. The entrance is made of travertine marble and dominates the “battle field” where the “heroic challenges” took place. The structure also had a social use seeing as it hosted the apartment of the grounds caretaker. 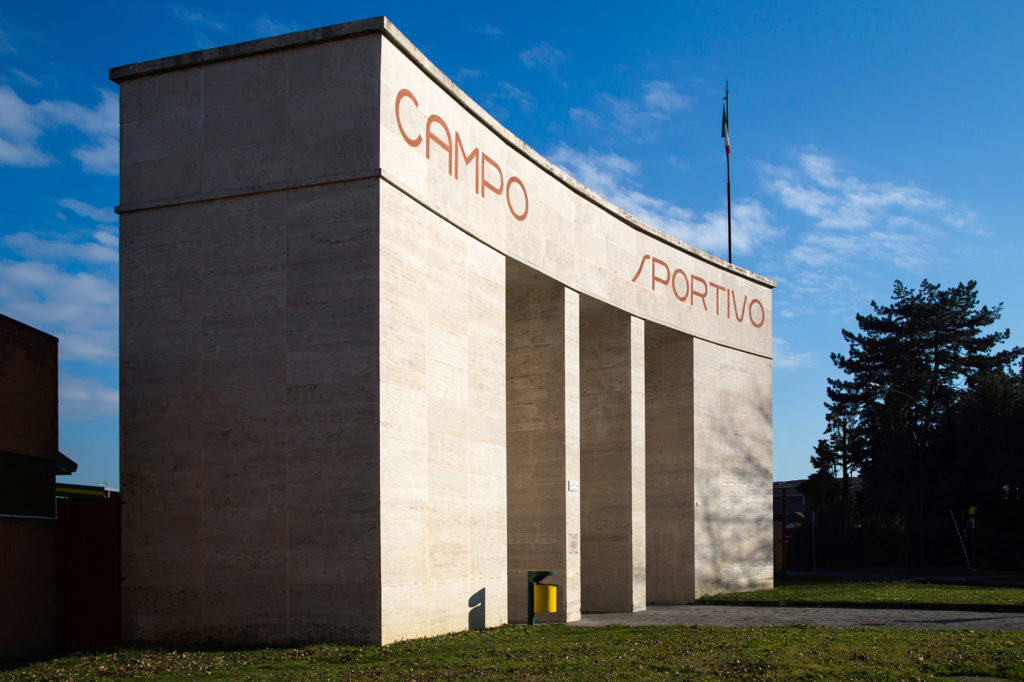 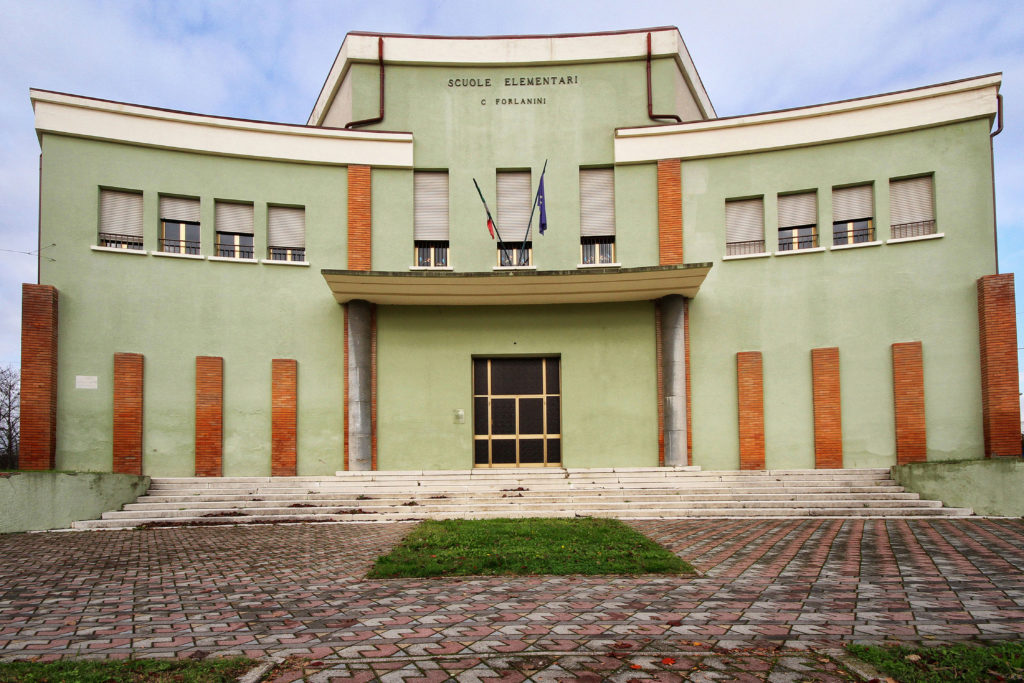 Initially the building should have had 12 classrooms , a main entrance that gave on Piazzale Forlani and two side buildings. Unfortunately one of the side buildings was never built and the building itself has never been completed.
During the 1960’s the windows and doors were modified but on a whole the general structure is still as the original. 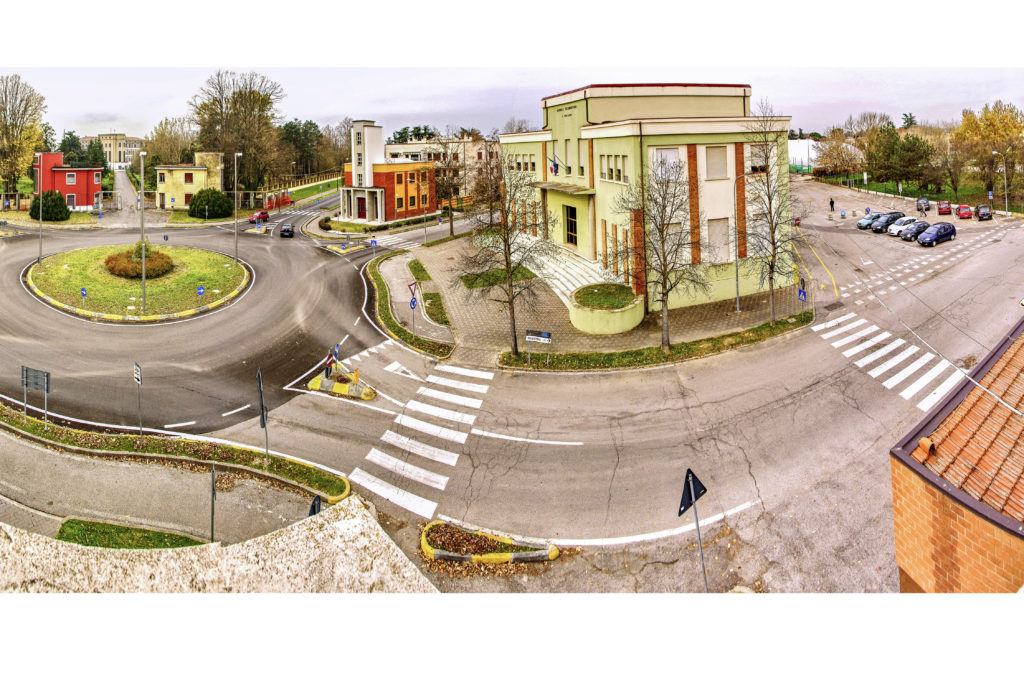 The building was erected in 1939 based on the project of the engineer Frighi and the technical creativity of the Minister Edmondo Rossoni, founder of Tresigallo.
The structure is high and imposing, five storeys high, with spaced walls , a chapel , a terrace/solarium, port hole windows and a central spiral staircase.
During the second founding of the town it used to accomodate women during their convalescence in order to prepare them to return to work.
The materials and decorations used for the Sanatorium are typical of the “Façade” architecture of the 1930s: the corners meeting in the front tower with high half pilaster windows framed in “marmetta”, a by-product of marble.
Around the building there is large Park bordered by a wall that hides a good amount of the main structure but also adds a scenographic effect aided by the entrance boulevard and its trees running on either side all the way to Piazzale Forlanini.
The building was used as an old people’s home and an outpatient clinic but has now been completely shut down. 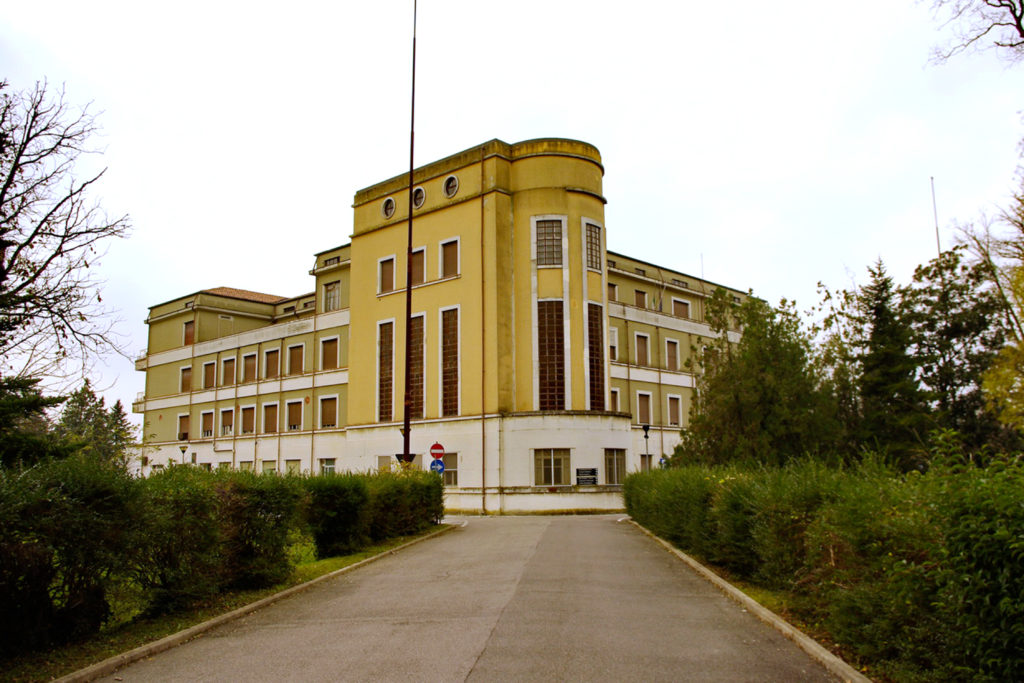 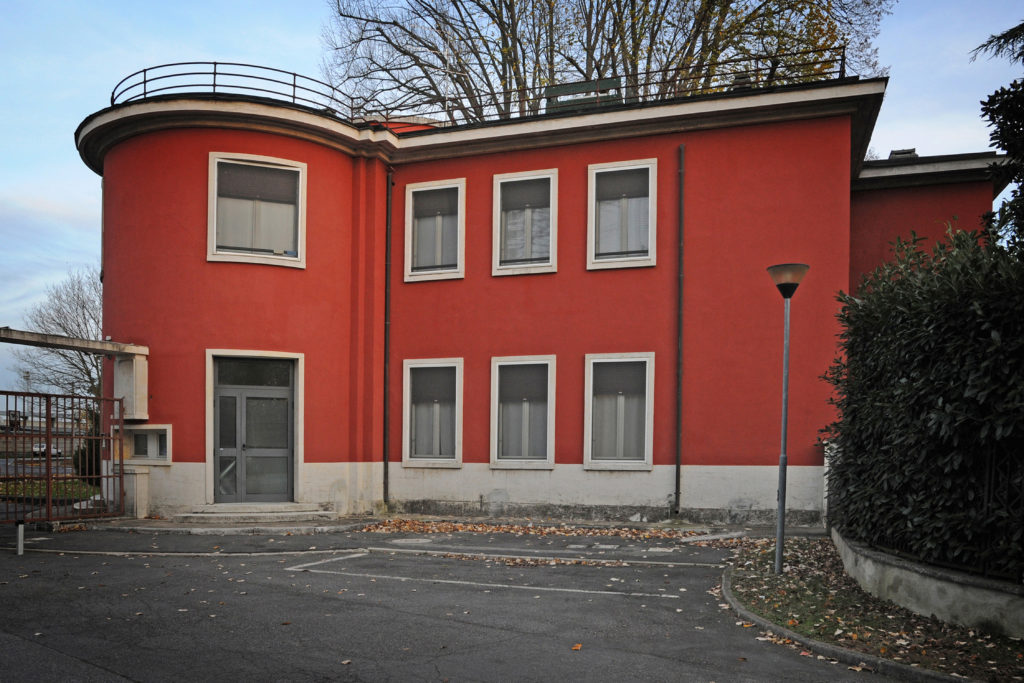 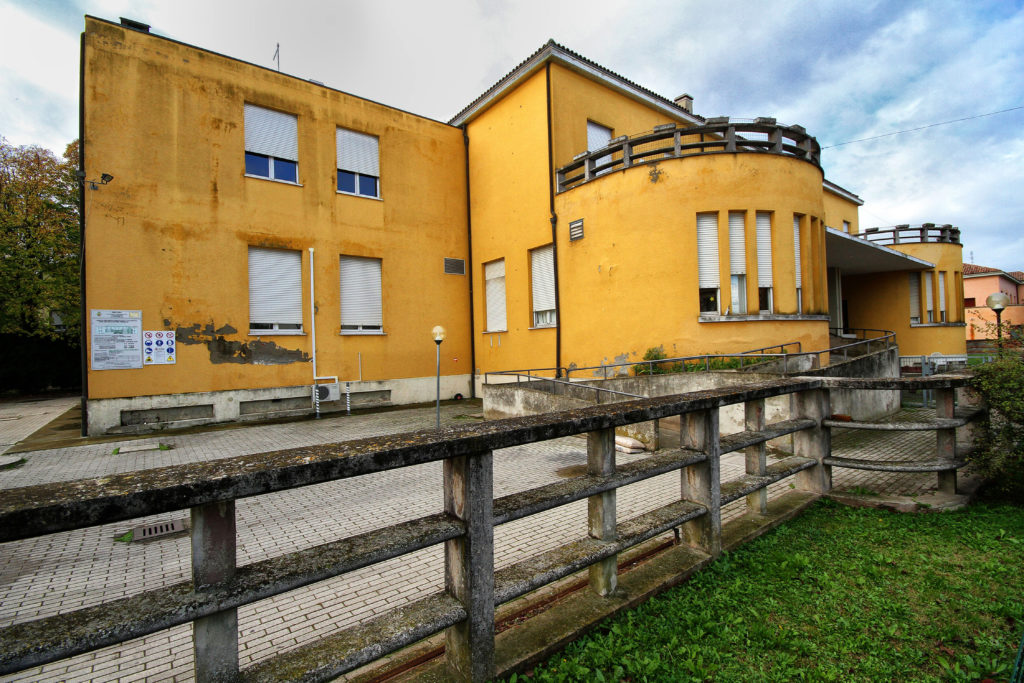 The structure is made of a central parallelepid shaped building sided by two semi-circular ones. This used to be a luxury hotel, accommodating for businessmen, industrialists and local or national figures of the regime.
The building was chosen by the german command as their headquarters during the Second World War and has had many different uses since.

Built between 1936 and 1939 and opened by Edmondo Rossoni in 1940 ,the building was Initially intended as a Chemical factory to make cellulose but it never started production due to the start of the Second World War. The factory could have produced 60000 kilograms of cellulose a day thanks to a capacity of 400 workers.
Towards the end of the 1940’s the factory was acquired by Lombardi Spa to produce tomato preserves and fruit extracts, something that had never been done before due to the lack of local raw materials seeing as the main crops of the area where hemp and sugar beets.
Later on the site became the Società Agricola Mazzoni’s center for vegetable and fruit production and sale.
The building is colossal, built around the 70 metre tall chimney, with a tasteful entrance made of 2 reflecting semi circular buildings that give on to the Via del Mare (once Strada Rossonia).The interior is characterized by mirrored glass bricks and reinforced concrete. In present times the factory is fully active and a point of reference for agriculture in the Province of Ferrara. Because of its particular architectural and historical importance the building has been bound by the Ministry for Culture and Fine Arts since 2015. 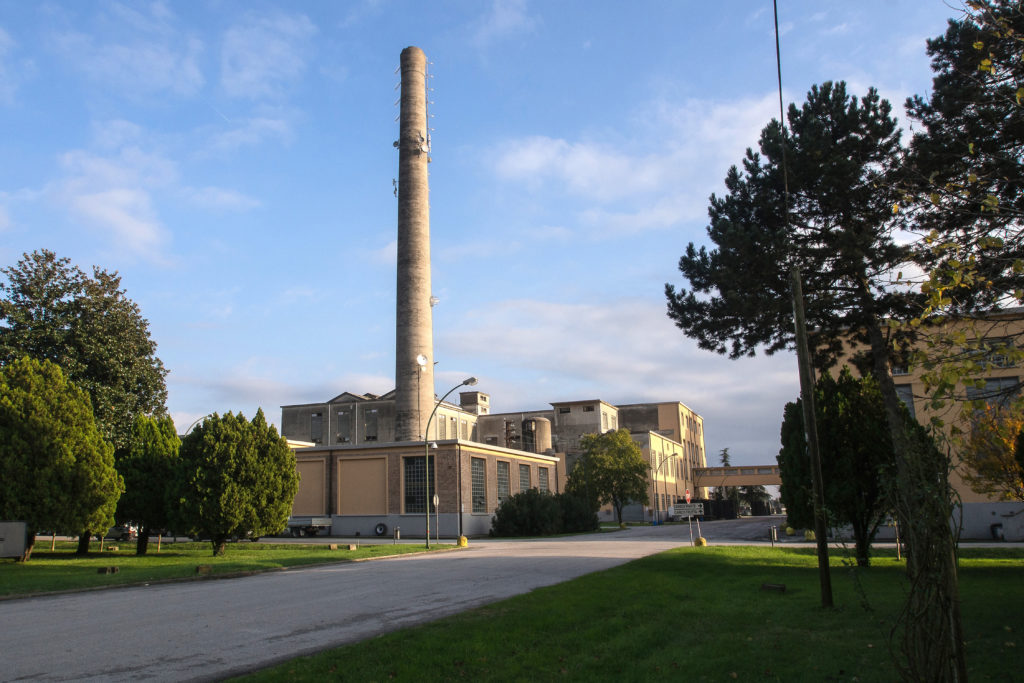 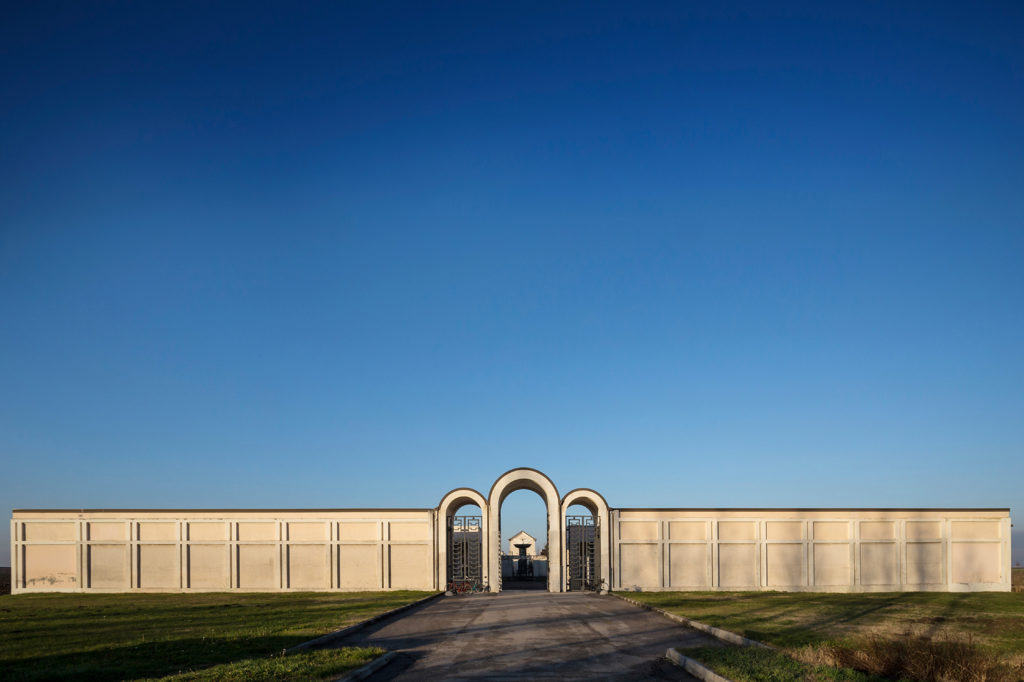 The cemetery, that dates back to 1934, is situated in the northern part of the town and is connected to Piazza della Repubblica by a long axis line becoming thus the concluding element of the most important street of the town.
The cemetery is enclosed by a boundary wall interrupted only by the a three arched entrance that leads straight to final resting place of the town’s founder Edmondo Rossoni. The structure represents the perspective boundary for the “other town” and gives a sense of closure to the urban center. The small church/funeral chamber was created by the sculptor Enzo Nenci and presents us with an unprecedented worker-angel with enormous hands taking flight over a green marble torch. 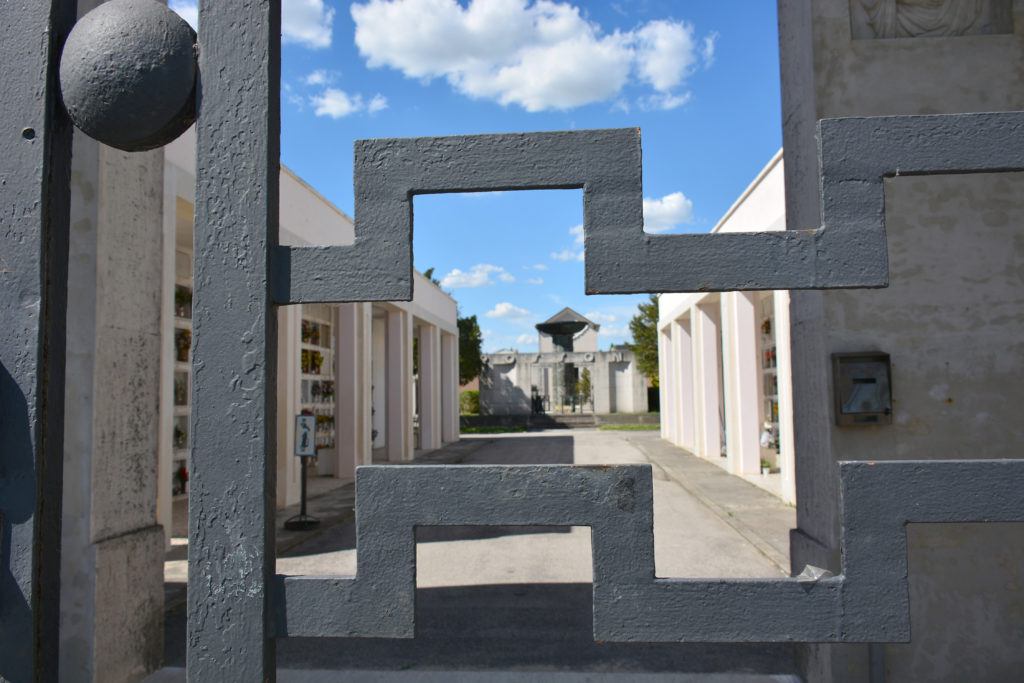 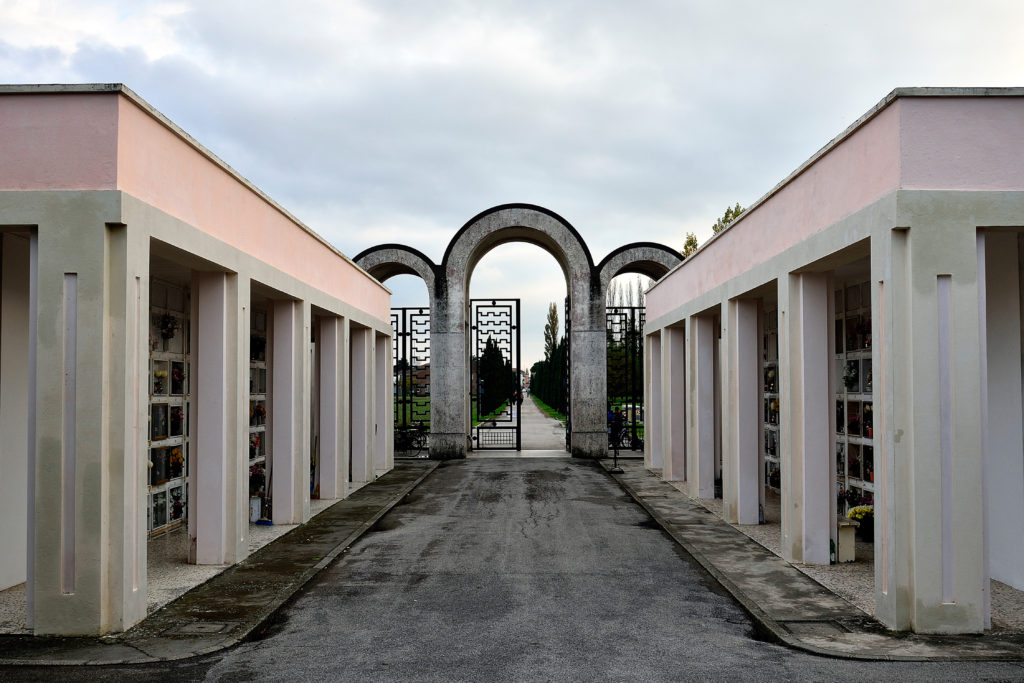 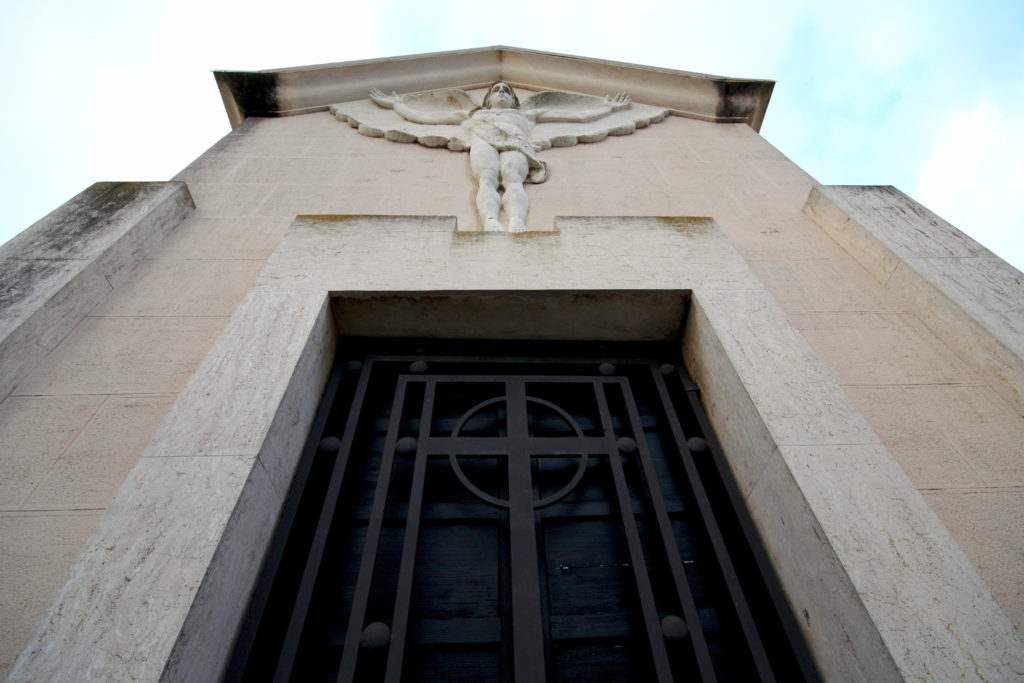